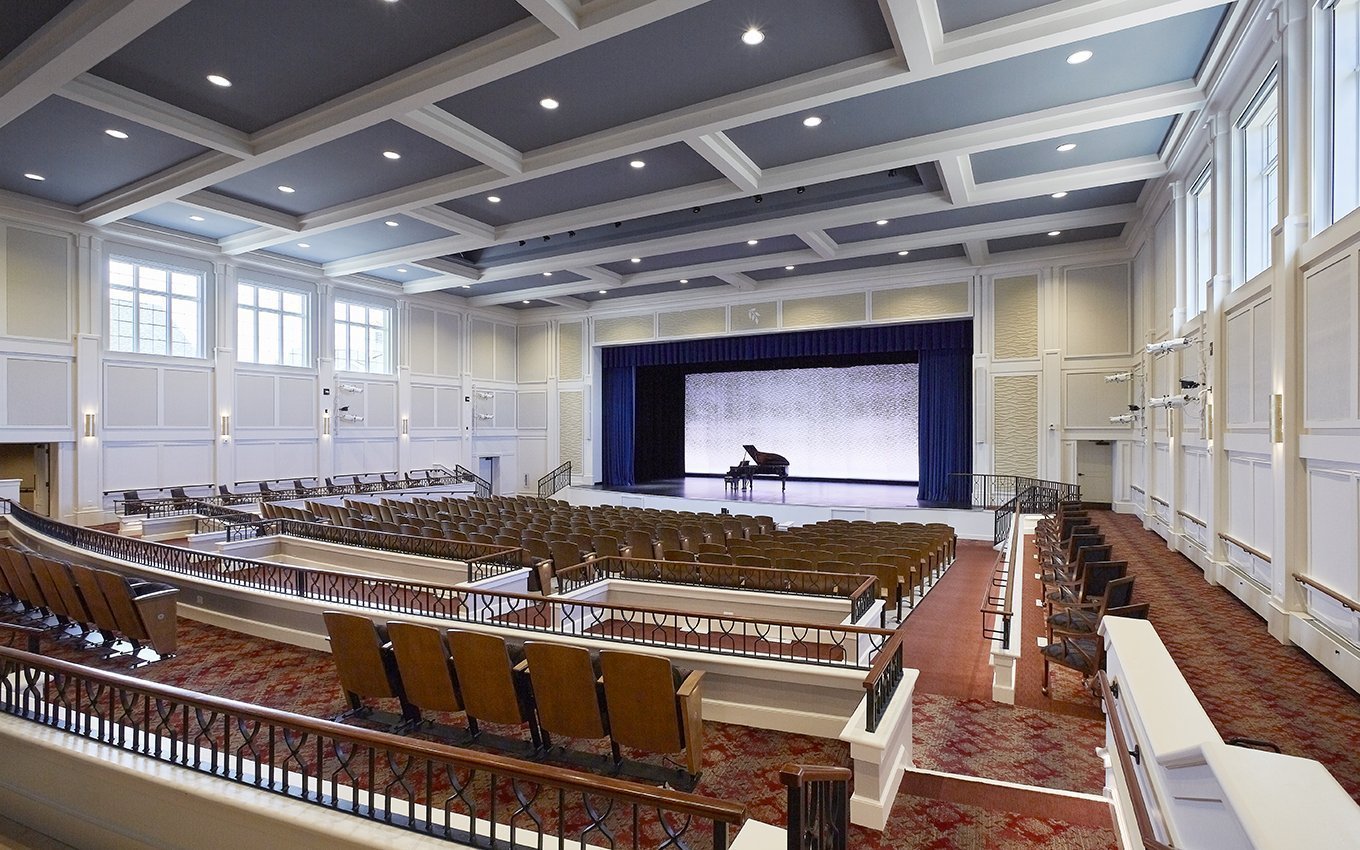 Senior Housing News has nominated our project at Well•Spring, A Life Plan Community for its annual Architecture + Design awards.  The renovation and expansion, which included a modern refresh of dining areas as well as an innovative theatre with 338 seats designed specifically for seniors, has been nominated in the Renovation or Repositioning category.

Well•Spring, located in Greensboro, N.C., started out like many communities in the 1990s that were built with relatively modest common areas: a small multipurpose room, a single dining room, a very small bar, and a single arts and crafts room. Since then, the community has experienced significant growth in its independent living population and felt it was time to for a major upgrade of amenities.

An extraordinary component of this expansion is the auditorium. Instead of the typical flat-floor multipurpose room, Well•Spring wanted a space where all members of the audience are able to see and hear as well as possible – but with the ambiance of a high-quality performing arts venue. The goal was to attract professionals to hold performances that would be exciting not only for the residents, but would drawn in members of the public who might otherwise never venture onto the Well•Spring campus.

The team used 3-dimensional modeling software to test design options and sought input from Well•Spring residents, leadership and staff. The completed space can accommodate 40 wheelchairs, with an additional 14 “companion” seats that can be removed as needed to make room for up to 54. The slope and placement of seats provide clear sight lines for everyone in the auditorium. Acoustics and systems were specially designed to accommodate audience members with hearing needs.

The theater is equipped with an LED system and black-out shades that enhance nighttime professional productions by organizations such as the Greensboro Symphony and the Greensboro Opera. During the day, the shades can be raised to let in natural light, making the space appropriate for memorial services, educational talks, and resident/staff meetings.

Mechanical systems were placed far enough away from the auditorium to almost totally eliminate background noise. Air for the heating and cooling systems comes into a plenum – an empty area beneath the floor where the audience sits — then up through small holes underneath the seats, resulting in virtually no noise or uncomfortable drafts.

Another key part of the project is a re-envisioning of the community’s dining services. Where before there was one traditional dining room with wait service, Well•Spring added a bistro with an open kitchen and a market-stall service approach for casual dining. The bar is relocated and expanded.  Corridors and connections are opened up to facilitate flow and better accommodate a population with a range of mobility. A central open space becomes a landing spot, with lounge and casual seating so residents and guests can stop and linger.

The redesigned spaces have been very popular with Well•Spring residents. During the planning process, it was unclear whether outside groups would be enthusiastic about performing in a theatre on a retirement community campus. To the contrary, the theatre’s amenities are so appealing that performance groups are contacting  Well•Spring to request bookings. Most important for marketing purposes, Well•Spring’s resident waiting list has grown, and the community is much more visible to the outside world. 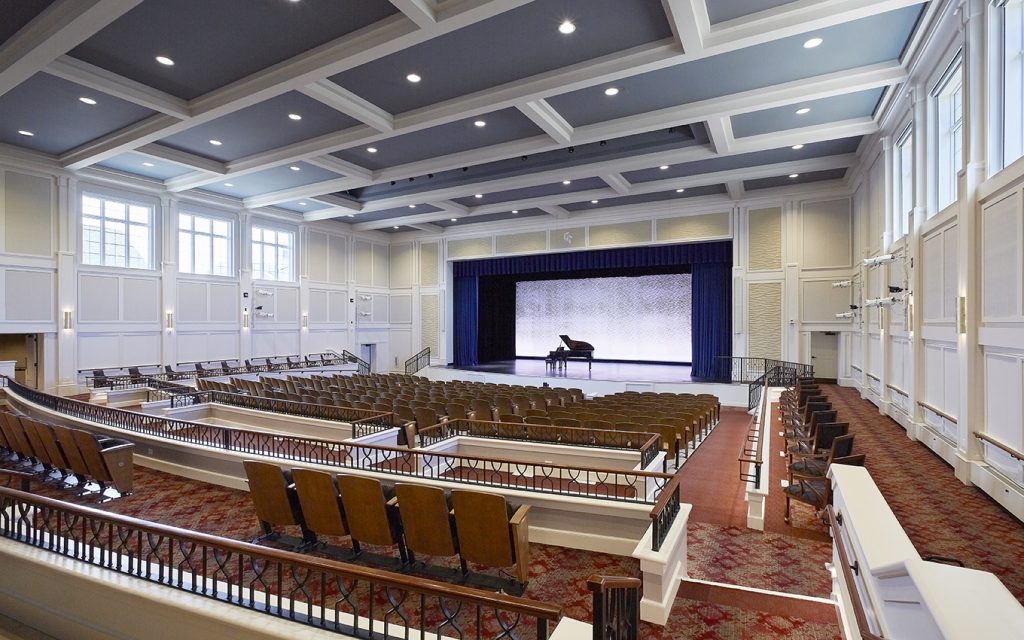 The theatre is immensely popular with residents and performing groups in the community. 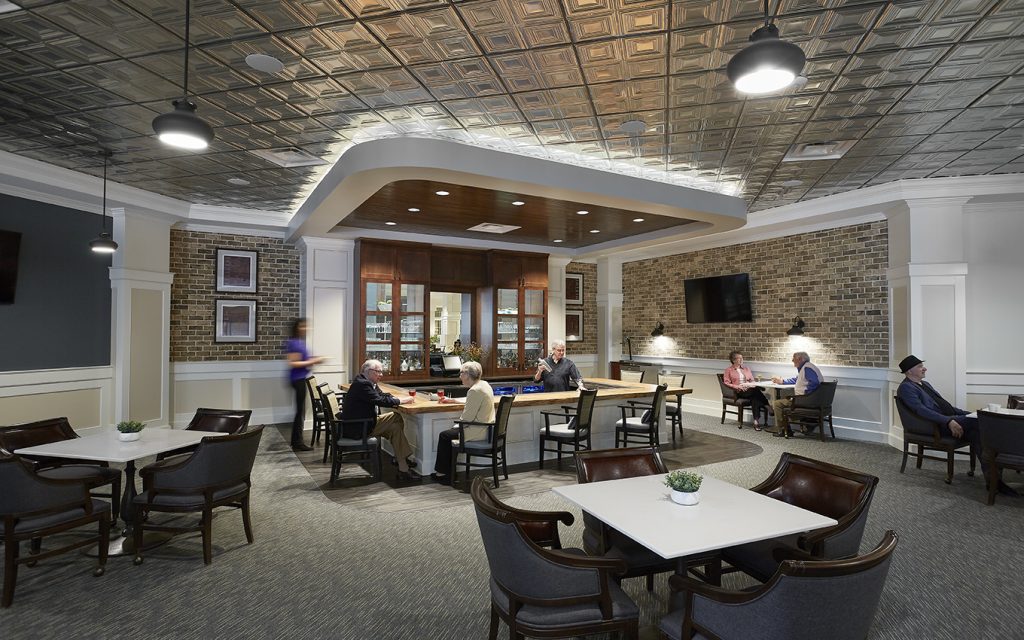 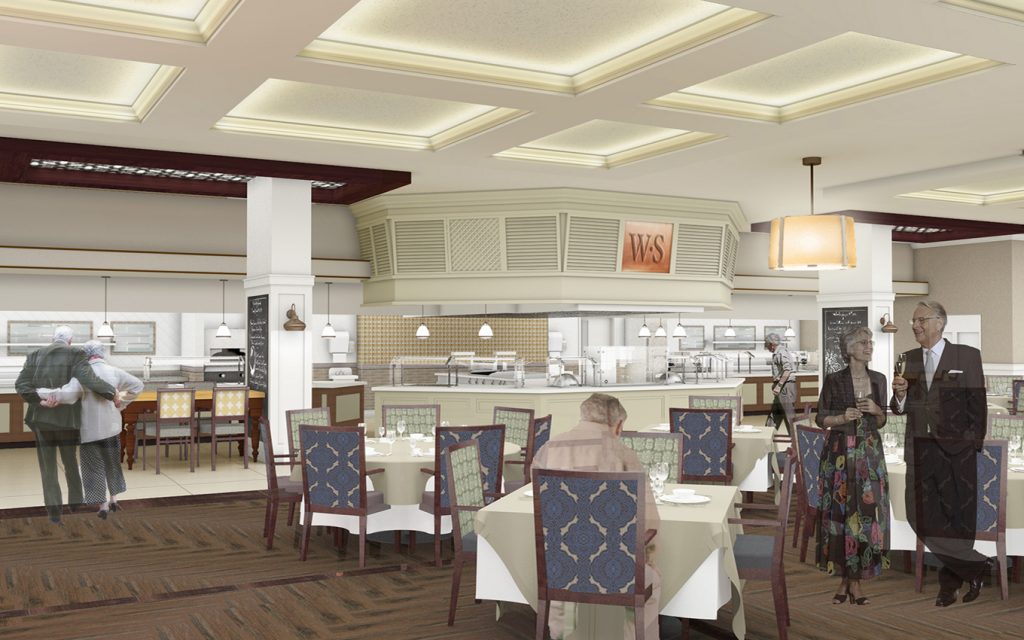