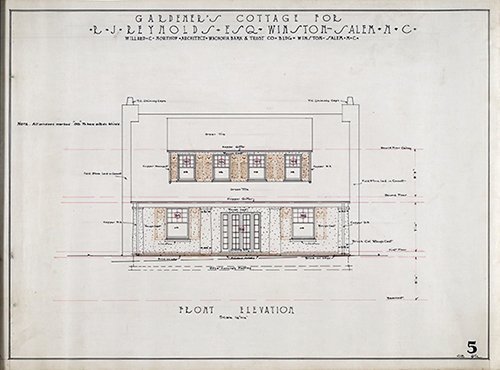 In 1927, Luther Snow Lashmit, a Winston-Salem native who had studied architecture at Carnegie Mellon University and at the Fontainebleau Ecole des Beaux Arts in France, joined Northup and O’Brien. He became a partner in the firm and remained a partner in the successor firms, Lashmit, James, Brown and Pollock, and Lashmit, Brown and Pollock. According to the Architectural Guide Winston-Salem Forsyth County (Winston-Salem Section NCAIA, 1978), Lashmit was “instrumental in reorganizing the state chapter (NCAIA) after World War II and was its president from 1947-48.” In 1976, he received the first Gold Medal awarded by the North Carolina Chapter of the AIA. Under Lashmit’s direction the firm designed many buildings at Salem College, Davidson College, and NC Wesleyan College. 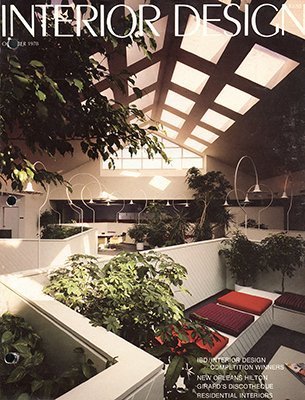 As a member of the firm of Northup and O’Brien, Lashmit was the principal designer of Graylyn, the residence of tobacco magnate Bowman Gray and now a conference center for Wake Forest University. Graylyn was built between 1927 and 1932 in a Norman Revival style. The house incorporates a “Medieval entrance hall, a Persian paneled card room, a Louis XIV library from Paris, a Georgian sitting room from London, an Art Deco indoor swimming pool, and an imposing circular stair hall with wrought iron by J. Barton Benson.” (Architectural Guide Winston-Salem Forsyth County, Winston-Salem Section NCAIA, 1978). 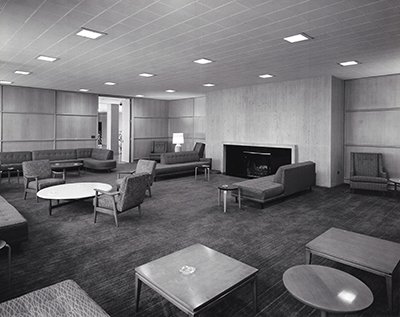 Lashmit was educated in the Beaux Arts tradition. Several renderings of his competition entries now adorn the CJMW office (Thanks to Tom Calloway, who saved them from the trash pile.). Current principals Tom Calloway, Don Johnson, and Alan Moore, knew Lashmit, who continued to visit the firm for several years after his retirement.

Lashmit considered Modernism to be a style, just like Classicism or Gothic. This perspective was enlightening for architects like Calloway, Johnson, and Moore, trained in the 1960’s and 1970’s, who had been taught to believe that Modernism was Truth and all other architecture “merely styles.” Lashmit was as comfortable designing in the modern style as in any other. His 1940 house for Mr. and Mrs. R. J. Reynolds, Jr., “Merry Acres” (known locally as “The Ship”) was a fine example of the International Modern style. 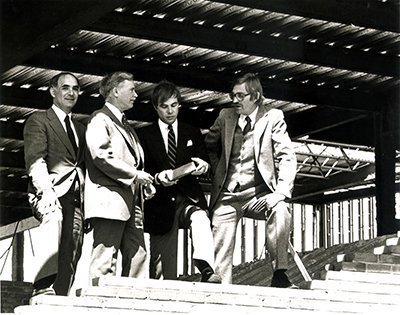 Lashmit, Brown and Pollock all retired in 1972 and the firm went through a series of changes in name and ownership (Jennings, Newman, VanEtten & Winfree; then Newman, VanEtten & Winfree, then Newman Calloway Johnson Winfree). Michael Newman was managing principal. Tom Calloway joined the firm in 1971 and future principals Donald W. Johnson and Alan Moore joined the firm later in the 1970’s. During this period the firm won NCAIA awards for the design of the Southeastern Center for Contemporary Art (SECCA), the NCSA Workplace Building, and the Roger L. Stevens Center for the Performing Arts. 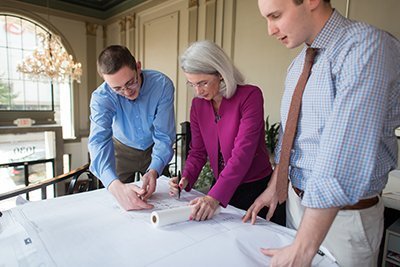 In 1984, the firm split, with Tom Calloway, Don Johnson and Alan Moore forming Calloway Johnson & Moore. In 1986 the firm incorporated. CJMW Virginia was established in 1997, CJMW Raleigh in 2015, and CJMW Roanoke in 2016. During this period, the firm’s work expanded regionally, with increasing depth in several areas of specialty: senior living, performing arts, museum, and corporate design. A number of clients who came to the firm for design services early in this period are still clients today, such as UNC Chapel Hill’s Kenan-Flagler Business School, The Forest at Duke, Well•Spring, Glenaire, and Greensboro Day School. In this same time, the firm’s interior design group – once just a few staff members working primarily on finishes and furnishings – has grown to a 13-person group that includes interior designers, technical staff, and an architect. The group’s interior architecture practice includes award-winning designs for hospitality, healthcare, corporate, and senior living.

While Tom Calloway and Alan Moore continue today as senior partners and key leaders, a look toward the future that included new and future leaders led the firm to become CJMW Architecture in 2010. The new name accurately reflects what the practice does, expressing clearly to clients and the public that the group’s focus is the built environment. In its largest sense, the word “Architecture” encompasses the entire building, to which each discipline within the firm contributes an essential piece. The shift away from focus on a few key individuals recognizes the importance and contribution of each individual within the firm to the success of the firm as a whole.